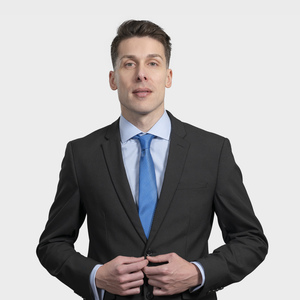 Has the UK market enjoyed positive returns in 2022? 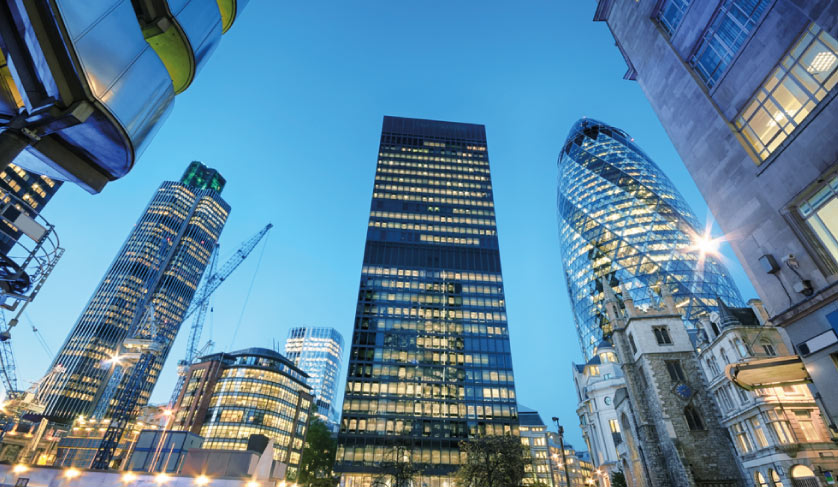 This year has not been kind to major stock markets around the world. However, the United Kingdom’s FTSE 100 has shown remarkable resilience. What is driving this extraordinary performance? Is this reflective of the broader UK economy?

First among its peers

The FTSE 100, a stock market index that represents the 100 largest companies listed on the London Stock Exchange, is widely used as a measure of the UK’s economy’s strength. 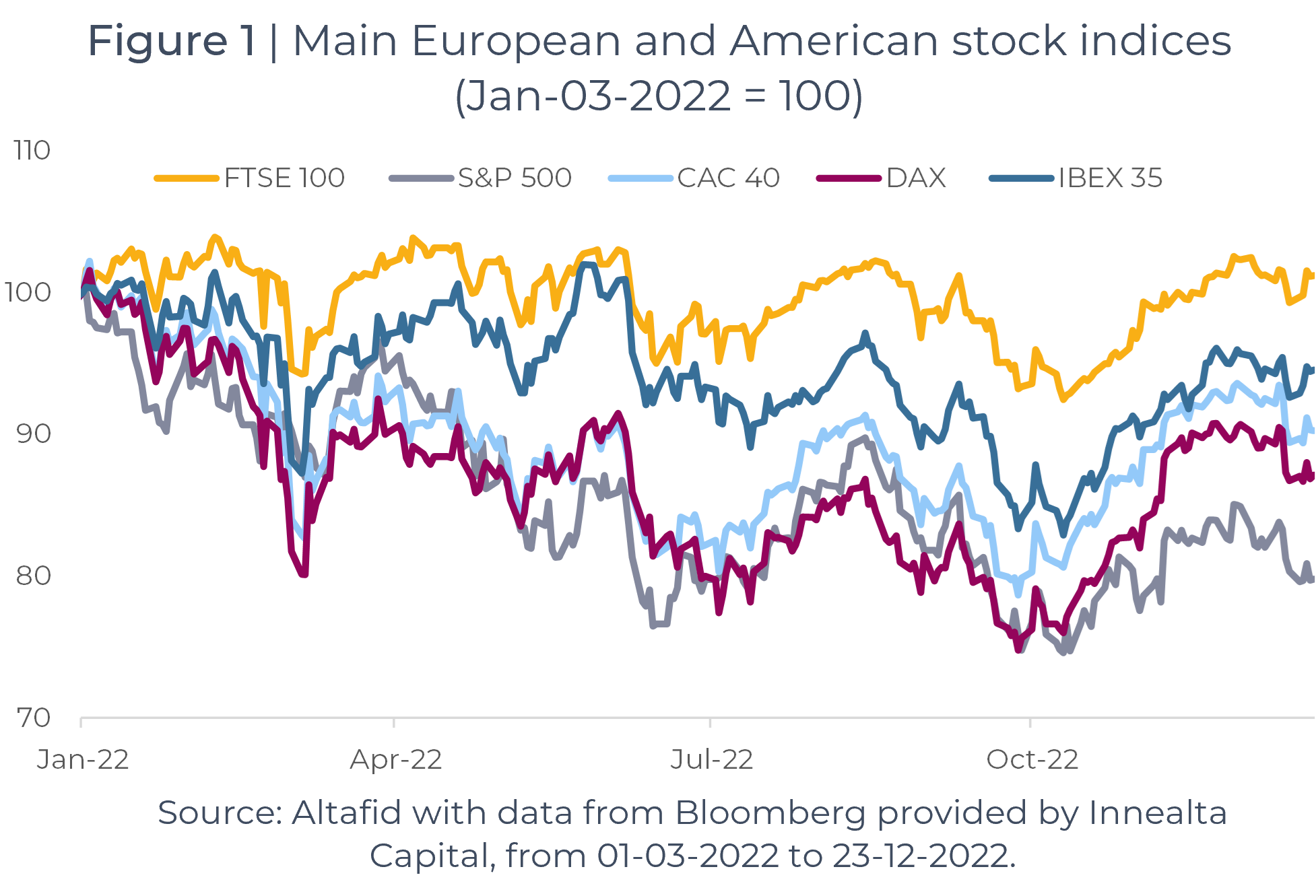 The reason behind this divergence is the distinctive stock composition of the index, which includes a high concentration of defensive sectors such as mining, energy, and utilities. These sectors have been largely immune to volatility, and have also benefited from a commodities super-cycle and a weaker pound. This has translated into higher dividend payouts, and an overall boost to the index's performance.

The weaker pound has contributed because many FTSE 100 components generate revenue outside the UK and report their profits in pounds: hence, a weaker pound has increased those reported profits. Companies with higher profits have, all else equal, higher stock prices, driving the index higher.

The impact of a weaker pound on the FTSE 100 had already been seen following the Brexit vote in June 2016. After the vote, the pound significantly depreciated against other major currencies, leading to a temporary drop in the FTSE 100. However, the index eventually recovered, even reaching all-time highs, thanks to the profit boost explained before. 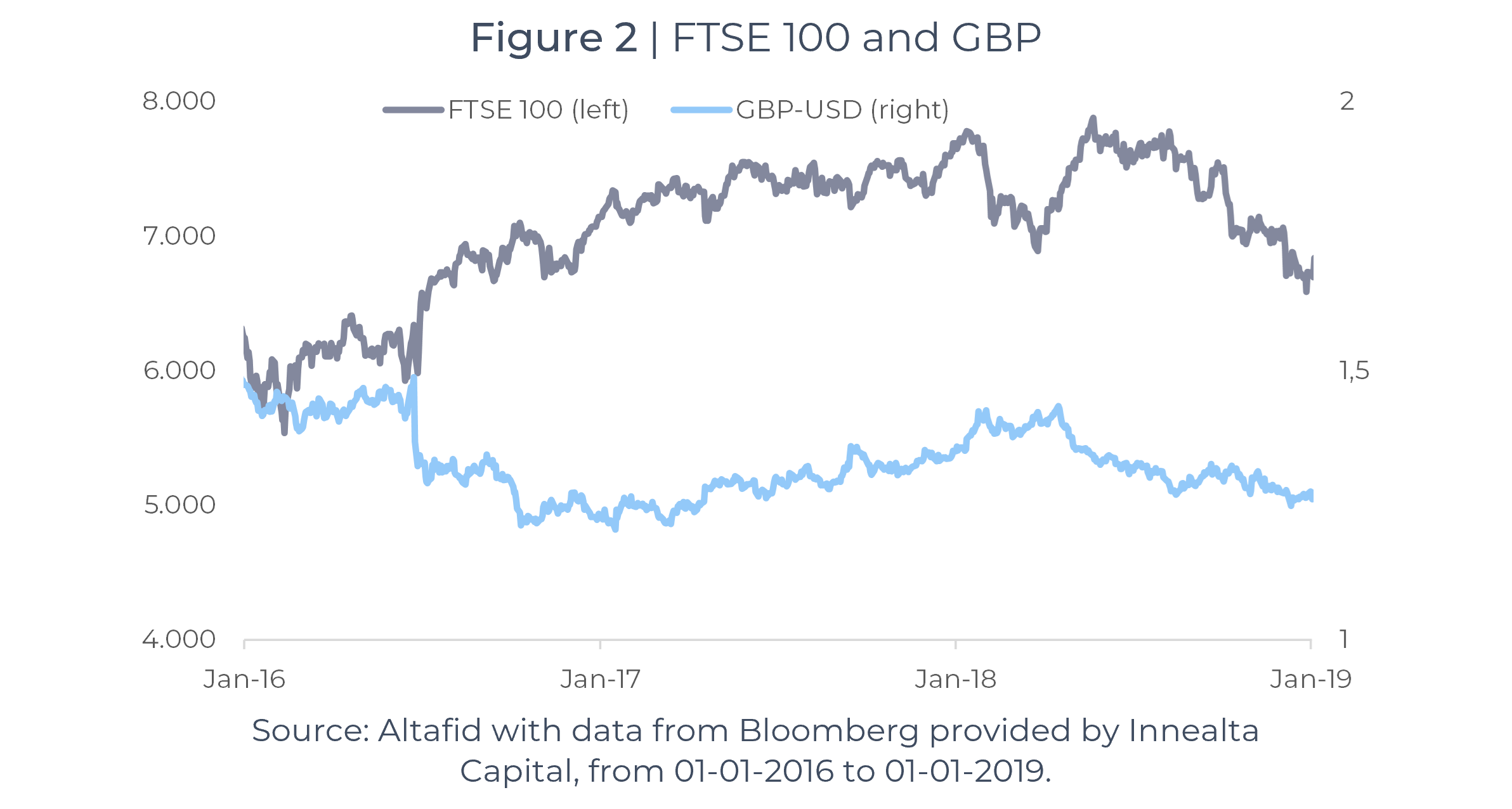 Additionally, the FTSE 100 index is heavily weighted towards cheaper sectors, such as banking, mining, and tobacco. But, despite this year’s difference in performance, last November we saw the widest valuation gap between the FTSE 100 and the S&P 500. One potential explanation for this could be investor concerns about the impact of a weaker pound on company margins, as inputs become more expensive. However, these worries may have dissipated lately, given that the US dollar has lost power, and productivity in the US has grown. Another possible factor: foreign investors often prefer to invest in the US due to the larger and more liquid investment opportunities available there. In other words, they may not find there is much to gain on the margin by tilting their portfolios towards more UK exposure. 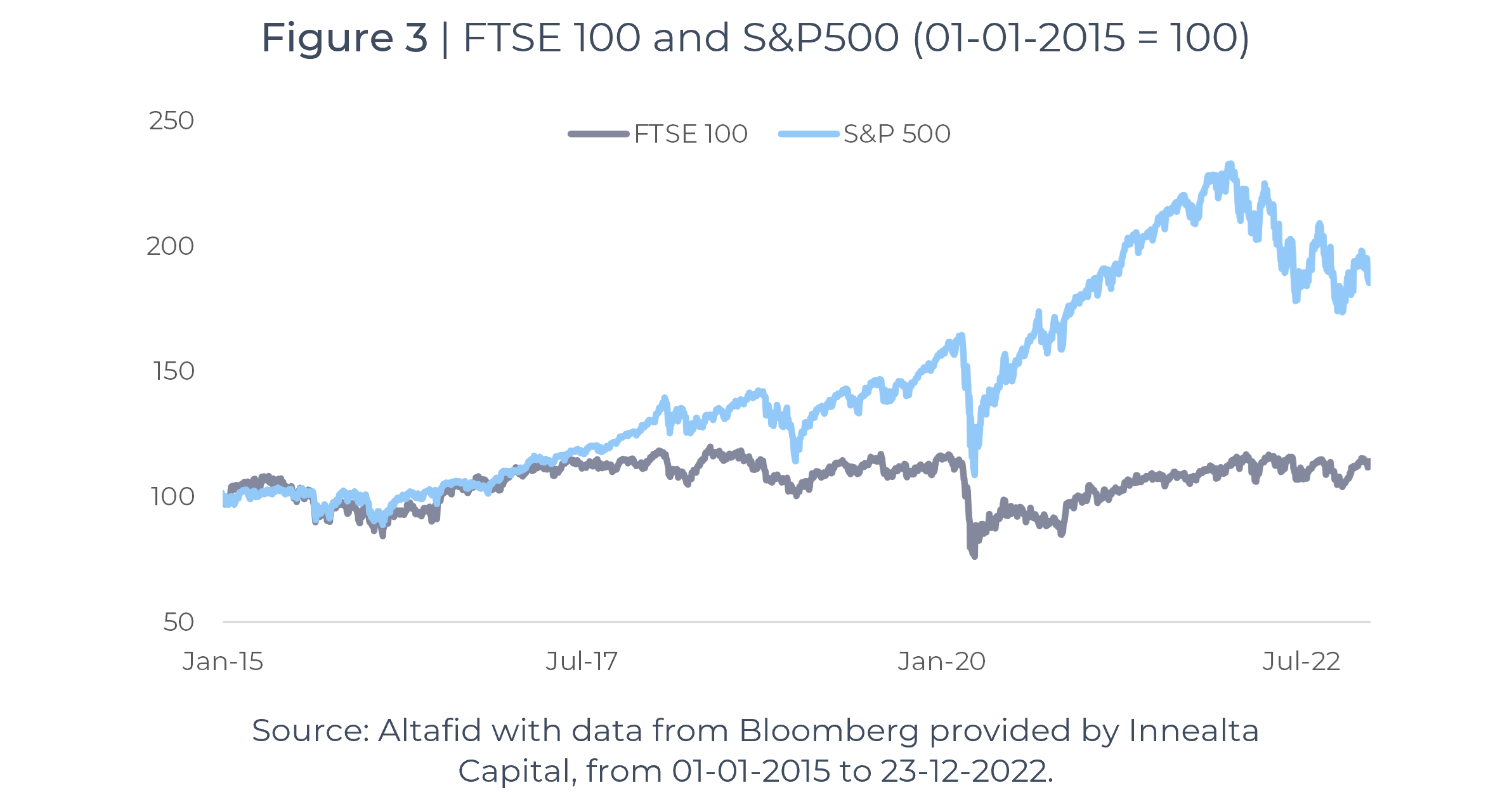 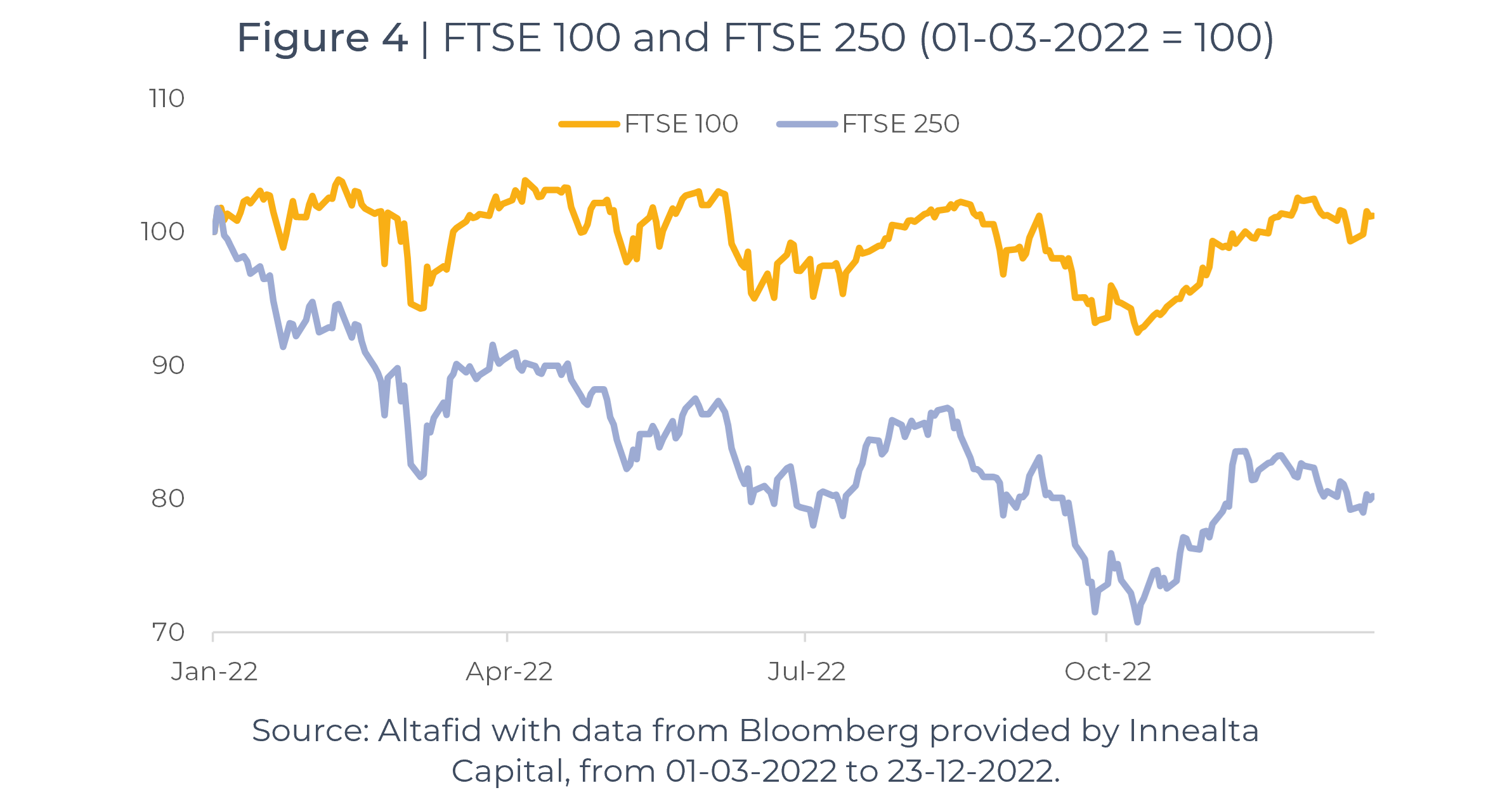 Firms on the FTSE 100 generate around three-quarters of their revenue abroad. For firms on the FTSE 250, the number hovers around one-half. In terms of performance, when comparing against the S&P 400, its American equivalent, the FTSE 250 is not currently an outlier. 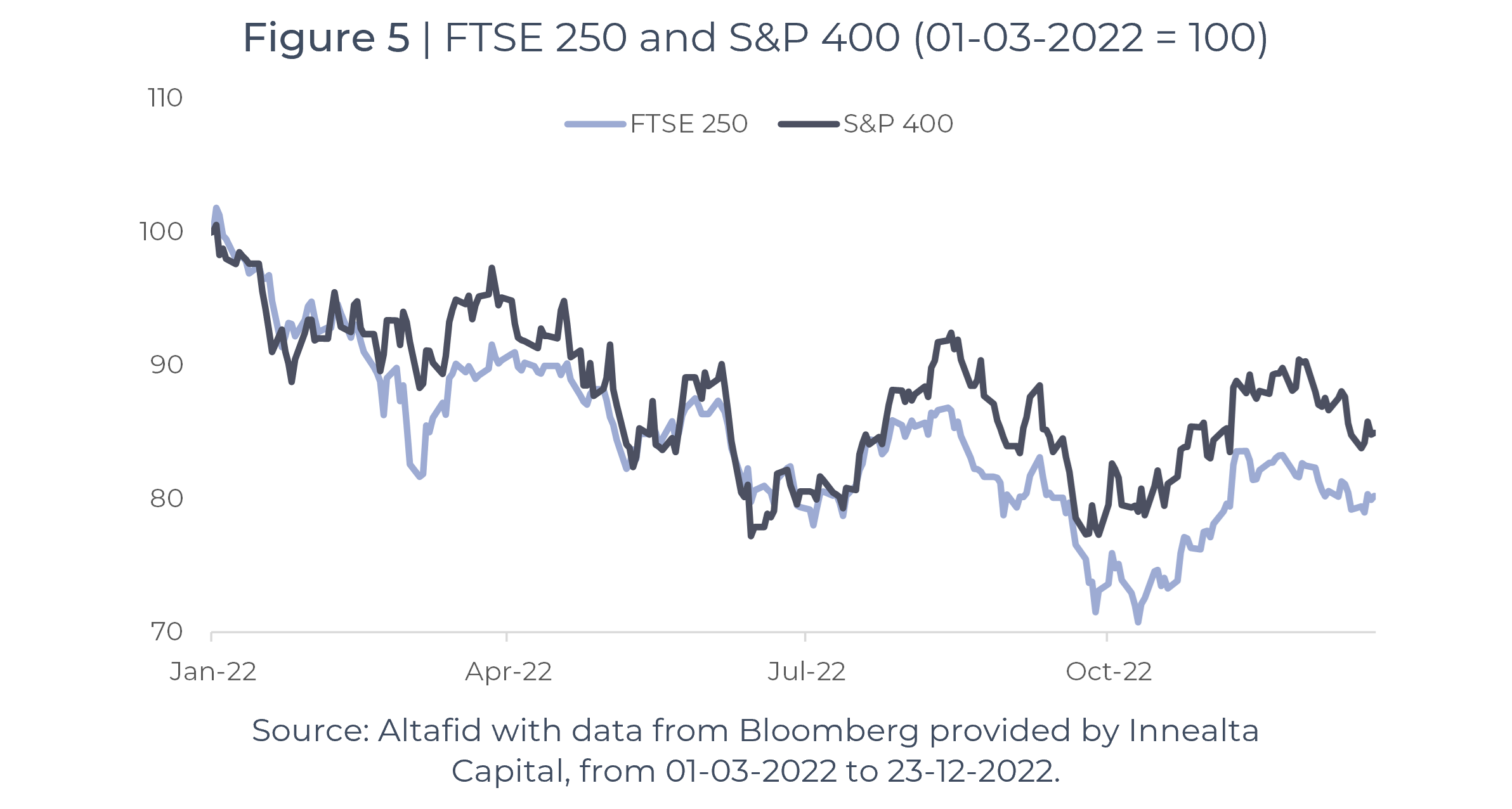 Although the FTSE 100 has performed well in 2022, we have some concerns regarding future performance. First, the index does not include medium- and small-sized companies, and has limited exposure to emerging industries like technology, which reduces its ability to adapt to changing market conditions. Additionally, uncertainty about inflation and interest rates are weighing more heavily on markets at the moment than considerations about the strength of particular companies within an index. Thus, we should expect other indices to recover as these macroeconomic worries dissipate.

In fact, some analysts have stated that the FTSE 100's strong performance is just indicative of a temporary "value rally". The distinctive makeup and lack of exposure to certain industries of the FTSE 100 may hinder its long-term prospects.

To conclude, the FTSE 100 has had a great year, largely due to its defensive stocks and the rise in commodities’ prices. However, the index could suffer in the near future for the very same reasons behind its year-to-date outperformance. Moreover, its success in 2022 hardly mirrors the performance of most companies across the United Kingdom.

The S&P 500 is an index of 500 large-cap stocks listed on the New York Stock Exchange or the NASDAQ, designed to represent the performance of the overall U.S. stock market.

The S&P 400 is an index of mid-cap stocks listed on the New York Stock Exchange or the NASDAQ, designed to represent the performance of mid-sized U.S. companies.

The Nasdaq is a stock market index that represents the performance of over 3,000 publicly traded companies listed on the NASDAQ stock exchange.

The Russell 2000 is an index of small-cap stocks listed on the New York Stock Exchange or the NASDAQ, designed to represent the performance of small-sized U.S. companies.

The Dow Jones is an index of 30 large, publicly traded companies listed on the New York Stock Exchange and the NASDAQ, designed to represent the performance of the overall U.S. stock market.

The CAC 40 is an index of 40 major French companies listed on the Euronext Paris stock exchange, designed to represent the performance of the overall French stock market.

The Deutsche Boerse AG German Stock Index DAX is an index of the 30 largest and most liquid German companies listed on the Frankfurt Stock Exchange, designed to represent the performance of the overall German stock market.

The IBEX 35 is an index of the 35 most liquid Spanish companies listed on the Bolsa de Madrid stock exchange, designed to represent the performance of the overall Spanish stock market.

The FTSE 100 is an index of the 100 largest and most liquid companies listed on the London Stock Exchange, designed to represent the performance of the overall UK stock market.

The FTSE 250 is an index of the 250 mid-cap companies listed on the London Stock Exchange, designed to represent the performance of mid-sized UK companies.

This material is for informational purposes and is intended to be used for educational and illustrative purposes only. It is not designed to cover every aspect of the relevant markets and is not intended to be used as a general guide to investing or as a source of any specific investment recommendation. It is not intended as an offer or solicitation for the purchase or sale of any financial instrument, investment product or service. This material does not constitute investment advice, nor is it a substitute for such professional advice or services, nor should it be used as a basis for any decision or action that may affect your business. Before making any decision or taking any action that may affect your business, you should consult a qualified professional adviser. In preparing this material we have relied upon data supplied to us by third parties. The information has been compiled from sources believed to be reliable, but no representation or warranty, express or implied, is made by Altafid, PBC or its affiliates, as to its accuracy, completeness or correctness. Altafid, PBC or its affiliates do not guarantee that the information supplied is accurate, complete, or timely, or make any warranties with regard to the results obtained from its use. Altafid, PBC or its affiliates have no obligations to update any such information.

This property and any marketing on the property are provided by Altafid and their affiliates.
Investment advisory services are provided by Innealta Capital, LLC, an investment adviser registered with the SEC. Please be aware that registration with the SEC does not in any way constitute an endorsement by the SEC of an investment adviser’s skill or expertise. Further, registration does not imply or guarantee that a registered adviser has achieved a certain level of skill, competency, sophistication, expertise or training in providing advisory services to its advisory clients.
Brokerage services for our advisory clients can be provided by Charles Schwab & Co., Inc. , Apex Clearing Corporation and Pershing LLC, each a SEC-registered broker-dealer and member of FINRA/SIPC. These broker-dealers are not affiliated with Altafid or its affiliates.
Please consider your objectives before investing. A diversified portfolio does not ensure a profit or protect against a loss. Past performance does not guarantee future results. Investment outcomes, simulations, and projections are forward-looking statements and hypothetical in nature. Neither this website nor any of its contents shall constitute an offer, solicitation, or advice to buy or sell securities in any jurisdictions where Innealta Capital, LLC is not registered. Any information provided prior to opening an advisory account is on the basis that it will not constitute investment advice and that we are not a fiduciary to any person by reason of providing such information.
Any descriptions involving investment process, portfolio construction or characteristics, investment strategies, research methodology or analysis, statistical analysis, goals, risk management are preliminary, provided for illustration purposes only, and are not complete and will not apply in all situations. The content herein may be changed at any time in our discretion . Performance targets or objectives should not be relied upon as an indication of actual or projected future performance.
Investment products and investments in securities are: NOT FDIC INSURED • NOT A DEPOSIT OR OTHER OBLIGATION OF,OR GUARANTEED BY A BANK • SUBJECT TO INVESTMENT RISKS, INCLUDING POSSIBLE LOSS OF THE PRINCIPAL AMOUNT INVESTED. Investing in securities involves risks, and there is always the potential of losing money when you invest in securities including possible loss of the principal amount invested. Before investing, consider your investment objectives and our fees and expenses. Our internet-based advisory services are designed to assist clients in achieving discrete financial goals. They are not intended to provide tax advice, nor financial planning with respect to every aspect of a client’s financial situation, and do not incorporate specific investments that clients hold elsewhere. Prospective and current clients should consult their own tax and legal advisers and financial planners. For more details, see links above to CRS (Part 3 of Form ADV) for natural person clients; Part 2A and 2B of Form ADV for all clients regarding important disclosures.
The IN logo is a registered trademark of LinkedIn Corporation and its affiliates.
©2023 All rights reserved. 1095-INN-06/23/2022
www.altafid.com